In today’s busy world, we seem to be obsessed with the idea of “productivity” and “work hacks”. It’s easy to see why: being able to get more done allows us to get ahead in life, and even gives us more time to do the things we love outside of work.The problem we run into, however, is that it is easy to get motivated, but hard to stay disciplined.

This is because most of us look at productivity in the wrong way: it’s not about signing up for the latest task management tool (which, admit it, you’ll use for a week and soon abandon) or chaining yourself to your desk, it’s about understanding the fundamentals behind how your brain works, and using it to your advantage.

Today, we’ll look at what science has unveiled about the human brain and productive work, and you’ll learn how to tackle the biggest pitfalls that sabotage your ability to get things done.

The first thing we need to acknowledge in the pursuit of a more productive lifestyle is the mountain of evidence that suggests willpower alone will not be enough to stay productive! According to research by Janet Polivy, our brain fears big projects and often fails to commit to long-term goals because we’re susceptible to “abandoning ship” at the first sign of distress.

Think of the last time you went on a failed diet…

You stocked your fridge with the healthiest foods & planned to exercise every day… until the first day you slipped up. After that, it was back to your old ways. To make matters worse, research by Kenneth McGraw was able to show that the biggest “wall” to success was often just getting started. Additional research in this area (surrounding the Zeigarnik Effect) suggests that we’re prone to procrastinating on large projects because we visualize the worst parts and thus delay in getting started.

What do our brains prefer to do instead? According to researcher John Bargh, your brain will attempt to “simulate” real productive work by avoiding big projects and focusing on small, mindless tasks to fill your time.

Perhaps worst of all, numerous studies on the concept of “ego-depletion” have provided some astounding evidence that suggests our willpower is a “limited resource” that can be used up in it’s entirety!

With all of that stacked against us, what hope do we have? What can we possibly do to be more productive? In order to figure this out, one of our best bets is to observe the habits of some of the world’s most productive people. Fortunately for us, numerous researchers have done exactly that, and their findings on the “secrets” of productivity will surprise you.

Related: 10 Insights on Building, Motivating and Managing an Exceptional Team

The Habits of Productive People

If I were to ask to describe the practice regiments of world-class musicians, you’d probably envision a shut-in artist who plays all day long and then tucks in their instrument at night. Amazingly though, research by Anders Ericsson that examined the practice sessions of elite violinists clearly showed that the best performers were not spending more time on the violin, but rather were being more productive during their practice sessions.

Better yet, the most elite players were getting more sleep on average than everyone else!

How is that possible?

Subsequent research by Anders reveals the answer: the best players were engaging in more “deliberate practice”. That is, they spent more time on the hardest tasks and were better at managing their energy levels.

Think of it this way: if you were trying to get better at basketball, you’d be much better off practicing specific drills for a couple of hours rather than “shooting hoops” all day long.

Since deliberate practice requires you to spend more “brainpower” than busy work, how can you implement it without draining your willpower? The first answer isn’t very sexy, but it’s necessary: the best way to overcome your fear of spending a lot of energy on a big project is to simply get started.

The Zeigarnik Effect (mentioned above) is a construct in our minds that psychologists have observed in numerous studies on “suspense”. One such study gave participants “brain buster” puzzles to complete, but not enough time to complete them. The surprising thing was, even when participants were asked to stop, over 90% of them went on to complete the puzzles anyway.

According to the lead researcher:

“It seems to be human nature to finish what we start and, if it is not finished, we experience dissonance.”

It’s the same thing that happens when we become engaged in a story in a book, movie or TV show: we want to see how it ends! You can use this knowledge to your advantage by just getting started on that next big project, knowing that first step really is an important one in being productive. Once you’ve gotten started though, you need better methods of staying productive and engaging in “deliberate practice” in order to avoid doing busy work.

A multitude of research has shown us that discipline is best maintained through habits, not through willpower. According to Tony Schwartz, CEO of The Energy Project, most people hold their productivity back by not rigidly scheduling work & rest breaks throughout the day.

Since most of us are worried about our willpower, we don’t push ourselves to our maximum productive output: instead of “giving our all” for brief productivity sessions, we distribute our effort throughout the day, leading us back to busywork to fill our time.

What should we do instead?

Research from Peretz Lavie on “ultradian rhythms” matches up with these findings: longer productive sessions (of 90 minutes) followed by short breaks (of no more than 15-20 minutes) sync more closely with our natural energy cycles and allow us to maintain a better focus and higher energy level throughout the day. 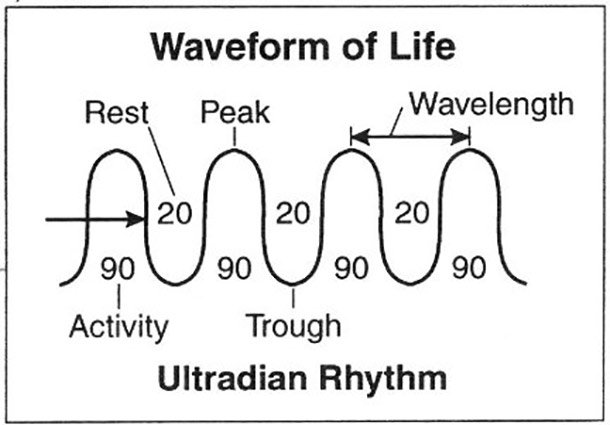 The best part? Both of these studies on energy management match up with the practice schedules of the world-class violinists: the most common practice regimen for the “cream of the crop” players was a 90-minute block of intense practice followed by a 15-minute break.

The moral of the story: It’s hard to be productive while trying to maintain high energy levels through your entire day.

It’s much easier for your brain to approach a 90-minute session of productivity when it knows that a 15-minute break is coming up afterward. Instead of trying to conserve your energy for multiple hours, we are at our most productive when we break big projects down into smaller chunks and plan a recovery period right after.

For projects done on your own time, try scheduling blocks of 90-minute work sessions with a planned cool down time of 15 minutes directly afterwards. When you know a break is on the horizon, you won’t try to “pace yourself” with your work, and will be more inclined to dive into the difficult stuff.

While great for tackling the toughest parts of large projects, this technique doesn’t really address many problems related to discipline, an important part of staying productive for more than just a day or two. Fortunately, we have research in this area that will change the way you approach discipline and that will get you to start using systems to maintain and track your progress.

The Art of Staying Disciplined

One segment of the population known for struggling with discipline are those who are addicted to hard drugs. Given their disposition for being unable to commit to many things, you might be surprised to find that during an experiment testing the ability of drug addicts to write & submit a 5 paragraph essay on time, those who wrote down when & where they would complete the essay were 90% more likely to turn it in!

These findings have some interesting correlation with those related to discipline in “normal” people: in a study examining the ability of average people to stick with a strict dieting plan, researchers found that those participants who rigorously monitored what they were eating were able to maintain far higher levels of self-control when it came to maintaining their diet.

Last but not least, Dan Ariely and colleagues conducted a study involving college students and found that students who imposed strict deadlines on themselves for assignments performed far better (and more consistently) than those who didn’t.

These findings were especially interesting because Ariely noted that students who gave themselves too generous of a deadline often suffered from the same problems as students who set zero deadlines: when you allot yourself too much time to complete a task, you can end up creating a “mountain out of a molehill”.

Since we now know that tracking our progress is a key component of productivity, how can we implement this practice into our daily routine? One method is to use an Accountability Chart to track what work you’ve completed during your 90-minute productive sessions, similar to how the dieters tracked their food consumption.

To easily implement one into your daily routine, simply create two-columns on a piece of paper, Google Docs spreadsheet, or even a whiteboard. 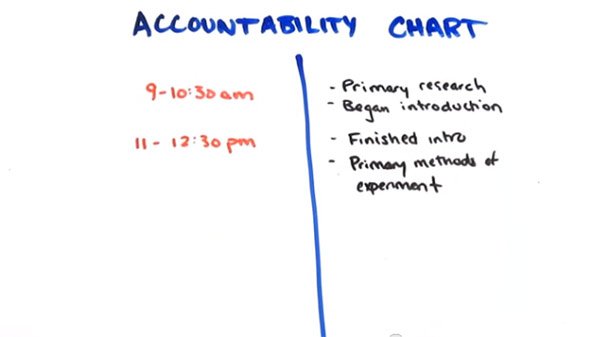 Don’t include any columns for your 15-minute breaks, as those times are for your own sake and means to replenish your willpower.

With a work schedule, an energy management strategy and a task-tracking system in place, the last challenge we have to face is that ofmultitasking.

The danger surrounding multitasking lies in how our brains perceive it: according to a 1999 study, we have a tendency to view multitasking as really effective from the outside… after all, shouldn’t productivity increase if we are doing multiple things at once?

The science shows us that this is an absolute falsehood: Researcher Zhen Wang was able to show that on average, multitaskers are actually less likely to be productive, yet they feel more “emotionally satisfied” with their work (creating an illusion of productivity).

Worse yet, Stanford researcher Clifford Nass examined the work patterns of multitaskers and analyzed their ability to:

…and found that they were terrible at all 3! According to Nass:

“We were absolutely shocked. We all lost our bets. It turns out multitaskers are terrible at every aspect of multitasking.”

How can we fight back?

The best way is to simply block ourselves from distracting elements that may cause us to multitask. When working on the computer, be sure to use tools like Controlled multi-tab browsing and StayFocusd (Chrome extensions) to block distracting sites and limit the amount of tabs you can have open.

The next best strategy is to create an evening planning ritual where you select a few priority tasks to accomplish the next day. The reason this method works far better than planning your daily tasks in the morning is because research from the Kellogg School(not the cereal :P) has shown that we drastically miscalculate the amount of focus we’ll be able to maintain in the future: that is, we strongly believe that we’ll be able to quickly plan our day the next morning, but when tomorrow rolls around without a game plan to get us started, we’ll likely fall back into our old multitasking ways to avoid doing any real work.

You can create an evening planning ritual with a simple pen & paper or use an online tool like TeuxDeux each night. List only priority tasks (the “big 5”) for the day and be sure to include completed tasks in your Accountability Chart when they are completed. 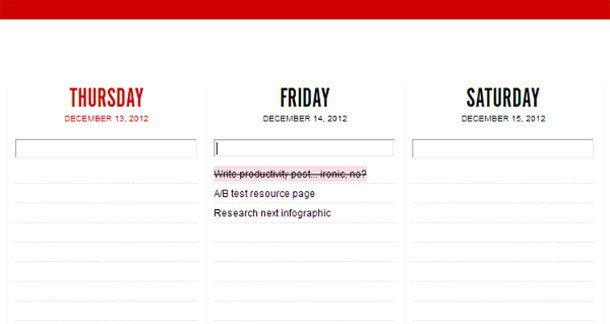 Last but not least, since the research has shown us that we are terrible at “winging it” when it comes to completing big projects,split large tasks up into smaller segments so your brain won’t view the assignment as something that is so large that you must multitask to complete it.

(For instance, instead of listing “Work on research project” as a daily goal, try something like “Finish introduction” or “Find additional sources” as a task you can complete)

World class experts utilize this strategy, so it ought to be good enough for you too!